The question whether Tobacco Harm Reduction should become a Public Health Policy tool globally, was discussed at a panel discussion, on Summit’s second day.
Participants in this panel have prominent roles in their countries, either in public health regulatory bodies or as harm reduction advocates, as Professor Panos Vardas, the chair of the session pointed out.
Professor Charmaine Gauci, Superintendent of Public Health within the Ministry for Health, Malta, focused on the impact of measures on youth. In Malta, there is an increase in tobacco uptake in youth, although they focus on prevention. But “we can’t have patronizing messages to youth”, she said, and added that they work with methods especially appealing to youth, such as teams to influence them and with social media.
Regarding smoking cessation, Prof. Gauci said that they want to introduce alternative methods for young people, such as e-cigarettes and she emphasized that campaign messages must be carefully made to avoid “fashion and glamour” factors that could draw youth to alternative tobacco products.
Karl E. Lund, professor in sociology at the Norwegian Institute of Public Health, and active in tobacco harm reduction, presented the case of snus use in Scandinavia as a proof concept of tobacco harm reduction.
Use of snus is widespread in Norway, and even more in Sweden. 20 years ago, in Sweden prevalence of smoke was high; now snus is more prevalent, being the preferred smoking habit, even in young adults (16-30 years). Snus is also used as smoking cessation aid in Norway and smokers who use it are by far the most successful in quitting compared to those who use NRTs or e-cigs.
Prof. Lund presented the current approaches of WHO and FDA on novel nicotine products regulation; WHO adopts a “traditional approach” based on banning potential harmful products; products which can’t be ruled out that they’ll have damaging effects in the future, and products that have an addictive potential.
Norway applied on snus the “weighting principle”—first adopted by the FDA—which consists in identifing absolute risk versus non-use, relative risk versus smoking, and usage patterns. Also in calculating the net public health effect, which then, guides the type of regulation.
Results show no or low association of snus with smoking-related diseases (lung cancer, other cancers, CVD, or diabetes). The availability of snus in Scandinavian countries has produced a net gain to public health, Professor Lund said. Health gains from smoking cessation, smoking reduction and smoking substitution produced by snus, have more than out-weighted the (marginal) health loss in the fraction of never-smokers taking up snus.

Among harm reduction advocates, Professor Karl Fagerstrom commented that smoking prevention, smoking cessation, or harm reduction are complementary methods, and that we need all three against tobacco smoking.
He pointed out that according to research, to use nicotine-which is the ingredient tobacco users seek-in a relatively cleaner form, reduces harm. Snus is characterized as less harmful by FDA. But we have a large continuum of nicotine products, he added. Novel nicotine patches in cellulose, without tobacco, similar to NRT products, is one of them. As in other products, various types of nicotine/tobacco products exist.
The breach in the nicotine products continuum is burned tobacco because it is the combustion that causes disease.
People are not likely to give up drugs, like coffee or nicotine, so we need to find less harmful nicotine products, as we have decaffeinated coffee for instance. These measures are needed to minimize Public Health costs, Prof. Fagerstrom concluded.

Professor Andrzej M. Fal, MD, President of the Polish Society of Public Health pointed out that smoking has emerged as a new Public Health risk factor that kills not only smokers but also passive smokers. Also, smoking influences most pulmonological diseases, coronary disease, obesity, and other diseases, which makes it a special risk factor to be taken into account.
In pneumonology offices, he noted, 30% of patients refuse to take any kind of therapy to quit smoking. Fortunately, we can now provide them with less harmful choices to meet their need/habit, so we have the obligation to provide them with these choices, he stressed.
It is important to introduce reduced harm products to Public Health Policies, Prof. Fal said, considering evidence-based data on those products (including authorization by FDA of heat-not-burn products). He emphasized that, only products proven to be safe should be introduced as aids to smoking cessation. There is no point in introducing products equally harmful to smoking.

Fernando Fernandez Bueno, MD and military surgeon, and spokesperson of the Spanish Harm Reduction Platform, presented data regarding smoking control policy in Spain and the Platform’s role.
Spain counts 9 million smokers but only 6000 e-cigarette users. However, traditional smoking cessation policies do not work anymore, so the Platform is an advocate to THR becoming a smoking control policy. Dr Fernandez Bueno described the Platform’s step-by-step approach to advance their aims: by helping the Spanish Health Ministry incorporate THR; by communicating their messages to the society; by setting out scientific observatories to assess security and quality of THR products, and by keeping all actors up to date.
He also presented a series of problems that the Platform has to fight, involving the perceived conflict of interest of its members, the questionning of the studies or data presented, and positions involving novel tobacco products and youth, etc.
Dr Fernandez Bueno noted that we need to follow the good examples of UK and New Zealand that set new rules in tobacco control and “help smokers who are our patients”. More actions must be taken: to give politicians easy solutions to implement, explain THR to MDs and nurses, offer support to smokers, engage in, and publish more research on the subject.

To the question of Professor Vardas—and Summit’s participants—whether the industry should use flavors in e-cigarettes, Prof. Fagerstrom said that flavors are being used, given that acceptance of e-cigs by users is needed. He commented that he is ambivalent about it, due to the use of flavored e-cigs by young people and concluded that “few” flavors should be allowed, to prevent young people to be influenced.
Prof. Fal agreed and noted that the most dangerous products are the home-made liquids that cannot be controlled. It is important that products with proven safety are introduce, he stressed, and gave the example of heat-not-burn products which have been proven by research to show 95% less risk compared to conventional cigarettes, and 85% lower mutagenicity. He added that harm reduction is a “tertiary prevention” public health measure and that results will appear in future generations.
Professor Vardas summarized the dilemmas that present regarding smoking control: can we guide new generations to avoid smoking and its deadly effects? The “hardliners’” doctrine consists in banning the habit totally, however this has been proved inefficient in other cases, he said, and stated the example of cannabis. A second dilemma is whether harm reduction policy is helpful to the young or is it a Trojan horse to other habits.
Prof. Vardas concluded:

we need to persuade the authorities, the WHO, to be more realistic. We should not have bad habits—he said—but the reality of the human beings is that they have a hedonistic nature and will always have catastrophic habits. Let us use the many choices and new technologies offered. 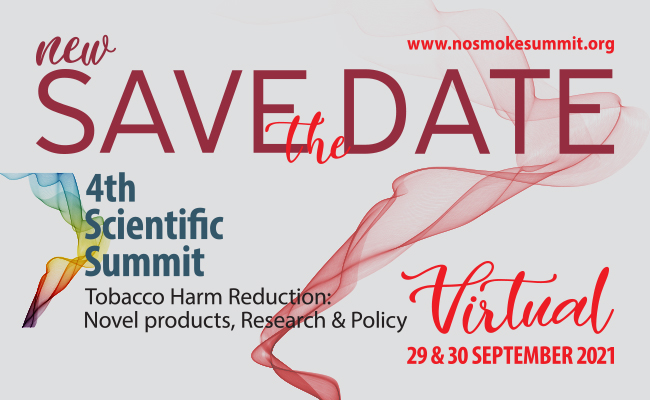